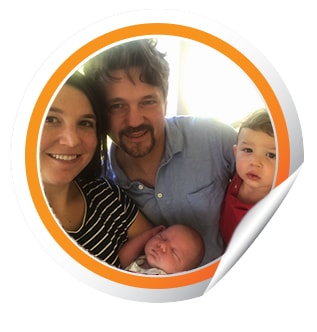 After welcoming their oldest son, Calvin, Callie Barker and her husband, Audrius, decided they wanted a change from the hustle and bustle of living in New York City to raise their little family. Although they had learned to maneuver large crowds, constant traffic and the daily commute of a big city, they envisioned living in a quieter neighborhood, in a house with a yard so their children had more room to play and create childhood memories.

“My dad has a house in South Florida that we frequently visited, so Audrius and I were already familiar with the West Palm Beach area,” shares Callie. “We wanted to provide Calvin with a more relaxed childhood, but we also made the move with our future children in mind. In fact, we were pleasantly surprised to find out that we’d have another member of the family not too long after we settled in.”

It was an exciting time for Callie and Audrius: the family had just celebrated Calvin’s first birthday, they were officially new Floridians and they discovered that in a few months, they’d be welcoming their second son, Cooper. Although Callie’s physician was also on-staff at two other local hospitals, there wasn’t a doubt in her mind that she wanted to deliver her baby at St. Mary’s Medical Center.

She was already familiar with the high level of care provided thanks to a visit to the pediatric emergency department at the Palm Beach Children’s Hospital at St. Mary’s Medical Center when Calvin was six weeks old. To become more familiarized with the hospital’s maternity services, Callie and Audrius signed up for a tour of The Birthplace, which is offered multiple times a month. Callie knew the importance of having a team of pediatric specialists available shortly after delivering, and she also appreciated the highly specialized care provided at the hospital’s Level III NICU, the largest in Palm Beach County.

“When it came time to welcome Cooper, my quick labor was made more comfortable by the attentiveness and compassion from the team of nurses who cared for me,” expresses Callie. “They kept me informed of anything they were working on in a way that reassured me and helped me feel at ease. I can’t say enough how thankful I am that they were always at my side when I needed them, they were all very sweet.”

Callie and her family stayed in one of the hospital’s Birthplace Suites, which provides patients and visitors with more comfortable amenities, such as a separate living room for hosting guests or extra storage space. It also helped Audrius entertain newly-promoted big brother Calvin while Callie and Cooper rested in their own area.

While the medical professionals and staff at St. Mary’s are dedicated to caring for parents and their newborns during their hospital stay, they also work to help the family’s first days at home with their new bundle of joy.

“Our days are a little busier now that we have a 22 month old, a newborn and a dog to take care of, but I’m so blessed to have my husband, my mother and even Cooper helping me with our new baby,” gushes Callie. “St. Mary’s Medical Center and Palm Beach Children’s Hospital will always be special places for us. Not only did the children’s hospital help my oldest son during an emergency, St. Mary’s helped us welcome a little more sunshine into our lives with the delivery of our baby Cooper.”