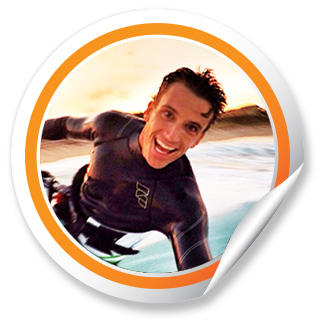 At age 3, Damien Leroy was exposed to extreme sports for the first time when his parents took him skiing in the Colorado mountains. Coming from a family of competitive skiers, it didn’t take long before he was hooked to the sport.

“For years I dedicated myself to ski racing, which gave me the opportunity to travel throughout the U.S.,” shares Damien. “Unfortunately, the stress on my body from the competitions led to multiple knee surgeries and a lot of downtime.”

Not one to be kept grounded for long, he began exploring other activities that would have less stress on his knees. Damien set his sights on kiteboarding, a sport he had encountered during his many travels throughout the country. Like skiing, he became enamored with this adrenaline-pumping activity and began a career as a competitive kiteboarder, visiting various international locations and earning numerous awards and recognitions.

After relocating to Jupiter, FL from Colorado more than 14 years ago, Damien continued kiteboarding and also became involved in a sport called paragliding. Unlike skiing and kiteboarding, this activity takes place hundreds to thousands of feet in the air using a motorized sail. Damien has been paragliding regularly for more than a decade, but even with an experienced adventurer, there’s always a chance something can go wrong.

During what was supposed to be a regular day of paragliding over the palm trees that line Jupiter Beach, Damien’s engine stalled as he prepared to make a turn, which caused the glider to spin out of control. As he gained speed and spiraled downward, he only had a few seconds to decide his next course of action. To avoid the possibility of an unmanned aircraft injuring someone on the beach, Damien waited until he was safely away from other people and above the trees before placing himself in the hands of a higher power and jumping off from about 150 feet in the air.

“In that moment, I knew I had to make a quick decision, whether it was right or wrong,” he recalls. “There isn’t a doubt in my mind that angels helped bring me down, otherwise I wouldn’t be able to tell this story.”

Damien was airlifted to St. Mary’s Medical Center’s Level I Trauma Center, the highest level of state designation, which has been providing the community with quality care for 25 years. He suffered a broken femur and tailbone, a fractured spine, a punctured lung and other less serious injuries. Dr. Rami J. Elkechen, orthopedic surgeon, performed surgery on Damien’s femur. After undergoing intensive medical and surgical care, and the compassionate treatment from the staff and nurses during his hospital stay, he is thankful to be alive.

“I can’t say enough how grateful I am for the treatment I received at St. Mary’s Medical Center and for everyone involved in the swift reaction after my accident,” expresses Damien.