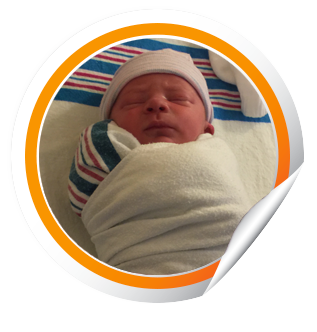 After enjoying five years of a wonderful marriage together, Jessica and AJ Rosenthal were ready to welcome a third little member to their party of two. It wasn’t long before the couple confirmed that their first child was on his way, a little boy they would name Brady. Although Jessica’s pregnancy advanced normally, there wasn’t a doubt in her mind that The Birthplace at St. Mary’s Medical Center was the right place to deliver her baby thanks to the hospital’s Level III NICU, the highest state designation.

“I knew that St. Mary’s provides a higher level of care and services than other area hospitals, and I wanted that peace of mind just in case anything unexpected happened during my pregnancy or delivery,” expresses Jessica. “I’m so thankful that I chose this hospital because, sure enough, I started experiencing some new symptoms a few weeks before Brady was due.”

After hooking her up to a monitor, the nurses discovered that Brady’s heartrate would slow down intermittently. Due to these circumstances, and after consulting with Dr. Sevald, Jessica opted to have a scheduled C-section. Following this decision, AJ informed the family that baby Brady would soon be here!

During her delivery, Dr. Sevald and her team discovered what might’ve been causing Jessica’s symptoms and the baby’s heartrate patterns: the umbilical cord had tightly wound itself around Brady’s neck. Because he was about a month early, the hospital’s Level III NICU team was present, but luckily Brady was healthy and fully developed.

“In some way, those uncomfortable symptoms were a blessing in disguise because we never would have realized that my son was in danger until it may have been too late,” shares Jessica. “Once AJ and I had Brady in our arms, nothing else mattered.”

The Rosenthals were soon head over heels with their newborn son, as were the rest of their families. Adding to the Rosenthal’s comfort was their stay in one of the hospital’s Birthplace Suites, which has upgraded amenities and a spacious living room attached to the patient’s room. The Rosenthals were also appreciative of the nurses, lactation consultants and everyone who played a part in helping the first time parents learn what to expect once they were at home with Brady.

“AJ and I joked at first that we wished we still had the nurses around to help us with all the new routines and life with a newborn,” says Jessica. “Even though we had that scare just before Brady was born, I knew the OB team at St. Mary’s was equipped to see us through it. We love our life as a family of three and we can’t wait to see all of Brady’s milestones and the extra happiness he brings into our home. Given my wonderful experience at this hospital, I would recommend it to anyone.”