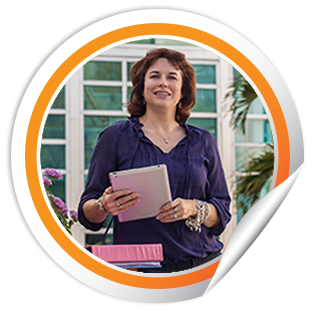 At just 39 years old, I was given the gift of life. Believe it or not, I am a survivor of both an aneurysm and a stroke. My name is Lori LeBeau, and I consider myself a medical miracle because I was fortunate enough to be taken to the Comprehensive Stroke Center at St. Mary’s Medical Center.

I had come down to spend the winter in South Florida from Ontario, Canada when I got sick with what I thought was a stomach flu. I had a headache and began to throw up. I had no idea that those symptoms were really the signs of an aneurysm rupturing in my brain, and the clock was ticking.

I had no prior health history that would indicate I would have an aneurysm, and even though I was still able to walk and talk, my other symptoms were concerning to my friends. After I’d been sick for two days, they insisted that I go to the closest emergency room. The doctors there ordered a CT scan.

Unable to rule out a stroke, and unsure of my diagnosis because of factors including my age, the physicians there decided to transfer me to the Comprehensive Stroke Center at St. Mary’s Medical Center for further evaluation. That is the reason I am alive today.

Upon my arrival at St. Mary’s, the Neuroscience team began a work-up under the direction of Dr. Ali Malek, Medical Director of the Stroke Program.They immediately diagnosed my aneurysm and began treatment.

After my family arrived, Dr. Malek explained the seriousness of my condition and the radical approach the team was taking to care for me. There were no guarantees I would survive, but both my family and I knew that I was in a Comprehensive Stroke Center, a place with the highest level of stroke care.

Two weeks after my aneurysm, and against the odds, I was strong enough to leave the hospital, due to the exceptional care and treatment I had received. I later read that 70 to 80 percent of people who have the same condition as me never fully recover.

I am so thankful for my life, and I believe a higher power was watching over me to get me to St. Mary’s Medical Center and under the care of Dr. Malek. I call him and the Neuroscience team at the hospital my "Angels."

After going back home to Canada, and having another medical issue, I made a full recovery from everything I’d been through and I realized that there was a reason I’m still here. I decided to come back to live in South Florida permanently. I moved close by St. Mary’s Medical Center, as I understand the importance of access to a hospital with a Comprehensive Stroke Center.

I was so inspired by the team that saved me that I am changing the direction of my life. I have enrolled in classes to become a Physician’s Assistant because I want to contribute to the medical field. I want people to know my story because no one wakes up thinking that today will be the day they are going to have an aneurysm or stroke and possibly die.

The truth is, if it happened to me, it can happen to anyone. I know that now, and I plan to make the most of the gift I have been given by Dr. Malek and the team at St. Mary's.