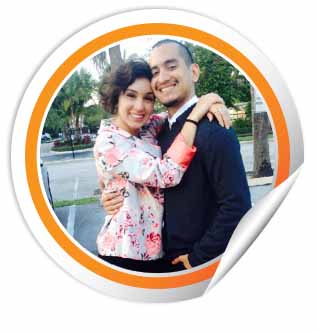 It was the premier night for Marvel’s latest film, The Avengers, and Maria Hernandez and her boyfriend, Josue, were excited for an action-packed date night at the movie’s midnight showing. On their way home, the couple found themselves in the center of a real-life action scene no one ever wants to experience.

“I was driving that night and the last thing I remember is seeing an oncoming car with its headlights off, but not until just before we collided,” recalls Maria. “I tried swerving out of the way, but there wasn’t enough time.”

Maria was instantly knocked unconscious, but Josue remained awake and tried his best to keep a handle on the situation. He called 911and remained alert to make sure Maria kept breathing until first responders arrived. Once the couple was extracted from their destroyed vehicle, they were rushed to the Level I Trauma Center at St. Mary’s Medical Center. While Josue’s sole injury was a dislocated hip, Maria suffered a traumatic brain injury, torn liver, broken ribs, two punctured lungs and multiple fractures all through the right side of her body.

Dr. Rami Elkhechen, an orthopedic surgeon on-staff at the hospital, surgically repaired Maria’s right arm and femur, and he also put Josue’s hip back into place. Dr. Thomas Saylor, an orthopedic hand surgeon also on the hospital’s medical staff, later performed a nerve reconstruction in Maria’s arm. While Josue was able to start physical therapy and his recovery process soon after the accident, Maria remained in a coma for two months. Despite the severity of her injuries, the highly-trained medical staff, nurses and rehabilitation team at St. Mary’s did all they could to help her regain mobility as her body continued healing.

“I’ve been a hip hop dancer and instructor for six years, so it was a big adjustment in the beginning for me to have to rely on other people to help me with even the smallest task, let alone move around on my own two feet,” shares Maria. “I wanted so badly to regain my independence and to return to the dance studio, so I focused every ounce of effort into recovering.”

She later learned that had it not been for the conditioning that dance created for her muscles and lungs, she probably wouldn’t have survived the accident. During Maria’s hospital stay, the compassion she was treated with made her feel as if it were her own family caring for her, not nurses and doctors she had met for the first time. As soon as he could move again, Josue visited his girlfriend in her room and spent the greater part of his time at her side, along with her family and dance colleagues.

After months of inpatient and outpatient physical, occupational and speech therapies at the Rehabilitation Institute at St. Mary’s, Maria was able to dance again. As a way to show her gratitude to the hospital that helped save her life, she coordinated a dance recital for the pediatric patients at Palm Beach Children’s Hospital at St. Mary’s Medical Center.

“Seeing how experienced the trauma team and other medical staff were, there was never a doubt in my mind that I would be on stage again,” expresses Maria. “I will be forever grateful that St. Mary’s Medical Center helped save me and my boyfriend, and allowed us to keep dancing to the beat of life.”