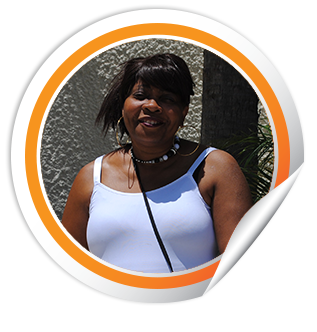 As an outgoing, vibrant and positive person, Ruby Minus has always enjoyed helping others. These character traits are what led her to pursue a bachelor's degree in pharmaceutical sciences. However, her studies were put on hold when she had a stroke.

"I was out with my best friend when I noticed my movement was a little off," Ruby recalls. "Then when I began to speak, my friend picked up on the symptoms and realized I was having a stroke. She immediately called 911."

Ruby recalls experiencing many different emotions at the time of her stroke, but she always reverted back to her strong faith and tried her best to remain positive.

She was admitted to a local hospital, where doctors discovered she suffered an ischemic stroke as the result of an obstruction within a blood vessel supplying blood to her brain.

After being discharged from the hospital, Ruby was sent to a skilled nursing facility to help her get back on her feet.

"While there, I felt myself getting discouraged, and I wasn't motivated anymore," she recalls. "I had to get a better grip on myself and my situation."

Ruby instead sought treatment at The Rehabilitation Institute at St. Mary's Medical Center.

"Rehab at St. Mary's worked better for me because it was a one-on-one experience," she recalls. "My physical and occupational therapists were wonderful. They kept me focused and on track to improve my condition."

While at the hospital, a poster for an upcoming Stroke Survivor Support Group meeting caught Ruby's eye.

"I was so excited when I realized I would have the opportunity to interact with others who have gone through some of the same things as me," she says.

After attending multiple meetings, she strongly encourages other stroke survivors to give St. Mary's support group a chance. She feels the meetings truly help them relate to each other and learn how to cope with life after a stroke.

Today, Ruby is focused on finishing her degree and pursuing a career in pharmacy. Her advice to other stroke survivors is, "Be determined and never give up."