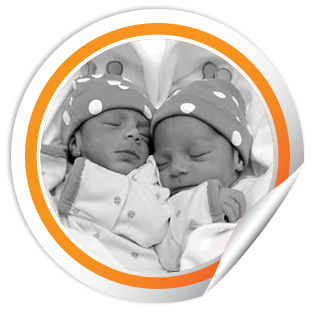 "I have two of the most important jobs in the world," says Victoria DelValle. "As a school community liaison, my goal is to make parents and children feel welcome and safe when starting elementary school. My other job is to be a good wife and mother. I was adopted, so the idea of having a big family of my own always appealed to me. We already had three girls, but my husband and I decided to try for one more in the hopes of finally having a baby boy."

After she got pregnant, Victoria discovered she was having twins!

"My husband and I couldn't believe it when the doctor told us - we were in utter shock," she recalls. "We found out we were having fraternal twin girls, and although we were initially hoping for a boy, we just wanted our babies to be healthy."

Since twins are high-risk and there is a strong likelihood they would be born early, Victoria decided to give birth at St. Mary's Medical Center.

"There was a good chance the girls would have to stay in the Neonatal Intensive Care Unit (NICU) once they were born, and I knew that with their level III NICU, St. Mary's had the resources and staff to give them the best possible care."

Victoria went into labor four weeks early and needed to have a Cesarean section, just as she had the last time she gave birth one year prior. She was extremely nervous when she went in for the surgery, but the doctors and nurses in the room talked her through the process and explained everything that was happening.

"After doing a little too much research, I couldn't stop thinking about everything that could go wrong," she says. "They helped ease the tension."

Despite being born about a month early, little Marianna and Milania came into the world crying and healthy. At first, the doctors were a little worried about the smaller twin, Marianna, but now she's a healthy eater and is actually the feistier of the two babies.

"Giving birth this time around was a new and wonderful experience for me, but not only because I had twins," says Victoria. "The staff at St. Mary's treated me as if I was their only patient. The nurses were so attentive, always asking if I needed anything. They made me feel valued and safe."

The care she received reminds her of how she strives to make her own children and the students at her school feel on a daily basis.

"I have a beautiful family, and I am thankful to have the opportunity to share my story and let the labor & delivery team at St. Mary's know how much they are truly appreciated."