'Really Brave' Girl, 10, Fights Off Shark That Almost Took Her Foot in Attack at Florida Beach

Dec 23, 2022
“I tried to stomp it, kick it, pull my leg out, and eventually it let go,“ 5th grader Jasmine Carney told her doctor of a shark attacked her at Hobe Sound in Florida

A 10-year-old Florida girl is back at school after nearly losing her foot in a shark attack.

Jasmine Carney, 10, was playing at Hobe Sound, a beach about 30 minutes from her home in Palm City, on Nov. 27 when her grandmother saw her come running in from the shallow waters, screaming, "Something bit me!"

"I see blood, quite a lot of blood," Stephanie Carney, 64, recalls during an interview with PEOPLE.

Lifeguards at the beach called 911, and Jasmine was airlifted to St. Mary's Medical Center, part of the Palm Beach Health Network, in West Palm Beach. 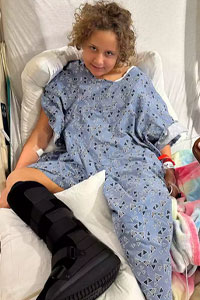 When Jasmine arrived at the hospital at 12:52 p.m., she was covered in blood and sand.

"I couldn't even see anything because there was so much sand," said Hus, who is an assistant professor of surgery at Charles E. Schmidt College of Medicine, Florida Atlantic University, in Boca Raton.

Sand had made its way deep into the girl's joints so the first thing the trauma surgeon did was clean the wound so her doctors could stop the bleeding.

One of the shark's teeth hit a blood vessel that supplies blood to the foot, Hus said, adding that she couldn't move two of her toes.

"Upon careful examination, you could see that the reason is that the foot is literally cut in half," he said. "All the muscle, the tendon, everything got severed all the way down to the bone. And the shark bit her in multiple locations on the foot — it wasn't just one bite. I think he bit, let go, bit, leg go, bit, and then let go — at least three or four bites."

The bites went all the way around the girl's foot, according to the doctor who said he could "see all the bones, all the tendons, the vessels, the nerves, everything was totally open."

Jasmine told the doctor she fought back during the attack by what he suspects was a black-tip shark. "He wasn't letting go," Jasmine said of the shark, according to Hus. "She said, 'I tried to stomp it, kick it, pull my leg out, and eventually it let go.' " 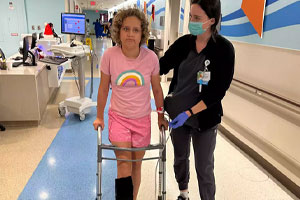 She was given antibiotics to prevent infection from both bacteria in the seawater and in the shark's mouth.

"Usually, kids really freak out and she didn't," Hus said. "She was smiling and happy."
In the operating room, Hus said, Jasmine was put under with anesthesia while he reconstructed her foot, a two-hour procedure that involved more than 100 stitches.
"She was really brave," her grandmother told PEOPLE.

Jasmine was released from the hospital Dec. 1. 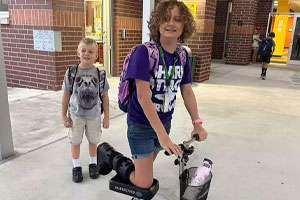 After a follow-up appointment with Hus, Jasmine was back at school on Friday.

"I fought a shark and won," she said of the ordeal, according to West Palm Beach station WPTV.

And to prove it, she wore a purple T-shirt to class, which says: "Shark Attack Survivor."