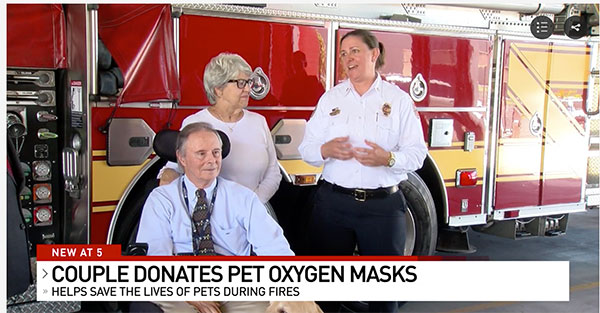 Here’s a story that’ll put a smile on your face, especially pet lovers.

It’s about a new tool for firefighters to help fire victims of the four-legged variety.

“You realize how important their pets are to them," said Don Chester, a West Palm Beach resident.

Chester, an assistant administrator at St. Mary’s Medical Center, has a service dog named Iggy. He’s a dog lover, which is one reason he and his wife are helping to put a new tool in the hands of West Palm Beach firefighters.

“I saw something on television once, probably Channel 12, and I said, 'Gee, I wonder if we have those here in West Palm Beach,' and I checked and at the time, they did not," he said.

Chester and his wife, Sally, are being honored Monday night by the city for donating 10 sets of pet oxygen masks.

The pet masks are used to save the lives of animals that suffer smoke inhalation.

CBS12 News was there and watched as firefighters rescued a cat named Cupcake from a house fire in Northwood Hills at the corner of 30th Street and Windsor Avenue.

They used an oxygen mask to save Cupcake’s life.

“Oh that’s wonderful. I’m amazed at what they can do," he said.

When firefighters rush off to fight a fire, they've got to get the people out safely. But it’s also important to save their cats and dogs that have been pulled from a burning home because the animals are often treasured companions and adored members of the family.

Getting more of these pet oxygen masks is something that’s been sorely needed. Until now, West Palm Beach Fire Rescue only had a few of these.

Now, they have enough so they can put one on every fire rescue truck.

Experts say over 100,000 pets in the U.S. die each year from smoke inhalation. When pets are exposed to smoke in a fire, they need a specially-designed mask that is smaller than the ones used to treat people.

"As you can see from these, they really fit onto the dog’s mouth and nose," Chester said.

Without a mask, firefighters have sometimes had to use masks meant for people or even resort to mouth-to-mouth resuscitation to revive a pet once they get them safely out of a burning building.

“Cause it means so much to the families," Chester said. "You know, my dogs mean a lot to me. We wanted to help the fire rescue department with having the equipment they needed."

The Chesters hope their generosity will encourage others out there to donate pet oxygen masks like this to other departments that don’t already have them.