Although we made the decision to permanently close our Pediatric Cardiothoracic Surgery Program in August of 2015, to remain transparent we are disclosing the newest data available from the Society of Thoracic Surgeons (STS). The most recent Society of Thoracic Surgeons (STS) Congenital Heart Surgery Database report, which was released in January 2016, indicates that the overall risk adjusted mortality rate for St. Mary's Medical Center's Pediatric Congenital Cardiac Surgery program is 4.9 percent. This report period is from July 2011 to June 2015. There is no statistically significant difference between our program's mortality rate and the average mortality rate for all hospitals that participated in the STS Congenital Heart Surgery Database during the same reporting period.

The Agency for Healthcare Administration (AHCA) completed its survey of St. Mary’s Medical Center on June 12th on behalf of the State and the Centers for Medicare and Medicaid Services (CMS). The surveyors found only two deficiencies for which they requested corrective action, the first related to sufficiency of documentation of an individualized nursing care plan for one patient chart reviewed during the survey and a second regarding the frequency of the review of hospital policies. We have submitted our Plan of Correction to AHCA, which the agency accepted on July 16th. Our hospital remains in good standing with AHCA and in full compliance with Medicare Conditions of Participation. We are committed to providing high quality care to our patients and the community we serve.

St. Mary’s confirmed the accuracy of this statement with the Society of Thoracic Surgeons (STS) prior to its release.

On June 1, 2015, CNN aired a televised broadcast and subsequently published several online articles by investigative reporter Elizabeth Cohen claiming that “the death rate for open heart surgeries [for congenital heart surgery patients at St. Mary’s Medical Center] is 12.5%, more than three times the national average of 3.3% cited by the Society for Thoracic Surgeons.” This claim, which has been repeated in numerous follow-up reports by CNN and republished by other local and national media outlets, is wrong.  CNN reported an inaccurately calculated mortality rate based on an incorrect assumption of our program's volume.  We understand that Ms. Cohen used volume information obtained from our annual Certificate of Need reports filed with the Florida Agency for Health Care Administration, which included only a subset of the procedures performed by the program and reported to the Society of Thoracic Surgeons (STS).  As a result, the mortality rate calculated by Ms. Cohen is exaggerated, and the comparison between that exaggerated mortality rate and the national average mortality rate as calculated and reported by the STS is completely erroneous.

St. Mary’s Medical Center notified CNN that its calculation of the mortality rate for our program was inaccurate and that a comparison of that rate to the mortality rate reported by the STS would be inappropriate and misleading. We informed Ms. Cohen in a letter dated February 27, 2015, that “[t]he data you provided does not represent all cases and/or procedures performed as part of the program. The mortality rate that you have manually calculated is inaccurate, as it is calculated as a percentage of only a portion of heart operations performed by the program.” Given our response, we were astonished that she and her network nonetheless reported its deeply flawed calculation. 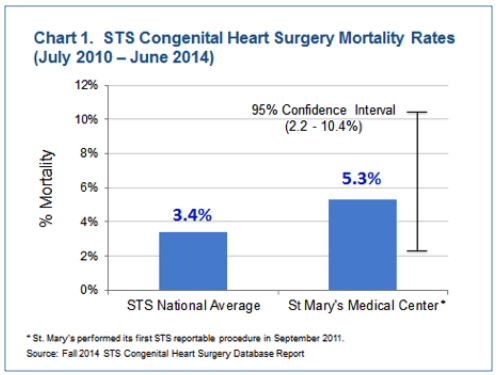 To correct this inaccurate and misleading claim about our program, St. Mary’s is releasing the risk-adjusted mortality data for our congenital heart surgery program as reported by the STS, providing a direct comparison to the national average.  For the four year period ending on June 30, 2014, the risk adjusted mortality rate for our program was 5.3%. Chart 1 shows that according to the STS confidence interval calculation, there is no statistically significant difference in our program’s mortality rate from the national average for all programs that participate in the STS congenital heart surgery database.

St. Mary’s Medical Center proudly and voluntarily participates in the STS congenital heart surgery database, the leading medical professional data repository for pediatric cardiac surgery and the world's largest database for congenital cardiovascular operations, which collects data from participating programs across the country and provides a means for benchmarking performance and identifying opportunities for improvement. The STS assigns to each program a rating of zero to three stars reflecting the mortality rate for each program.  Elizabeth Cohen was aware of this rating system, but chose not to include the information in her reporting. St. Mary’s program has received a two-star rating from the STS, as have 72 of the 113 programs that participate in the STS database, showing that the mortality rate for our program is within the expected range relative to the national average.

Every patient death is heartbreaking for the family and our entire team.  However, like all pediatric cardiac surgery programs, the patients we serve are afflicted with severe life-threatening conditions, and it is impossible to eliminate the risk of mortality.   Operating on the heart in an otherwise healthy patient has certain risks, but pediatric patients with severe congenital abnormalities raise the risk considerably.  CNN’s original presentation and ongoing coverage—combining an inaccurate claim about our mortality rate with heartbreaking stories of individual patients arranged into a timeline that likely could be recreated for any program across the country—are sensational, misleading, and lacking in journalistic integrity.

St. Mary’s Medical Center has been working since 2011 to build a high-quality pediatric cardiac surgery program to serve residents of the Palm Beach and Treasure Coast communities, and we are the only hospital providing this lifesaving care between Orlando and Hollywood.  St. Mary’s started the program to address an identified unmet medical need within the communities we serve, so that patients dealing with very complex medical cases wouldn’t have to travel far from their homes for treatment.  Our first priority has always been the safety and well-being of our patients, and we are committed to continuing to provide high-quality medical care to the communities we serve.

To establish a high-quality program, we started by recruiting one of the top surgeons in the field, Dr. Michael Black.  Dr. Black is a fellowship trained congenital cardiac surgeon with over 25 years of experience.  He came to St. Mary’s from California Pacific Medical Center in San Francisco, where he was chief of the pediatric cardiac surgery and the adult congenital heart program. Prior to that, Dr. Black served as the chief of cardiac surgery at Lucile Packard Children’s Hospital at Stanford University and as an associate professor in the department of surgery at Stanford University School of Medicine. 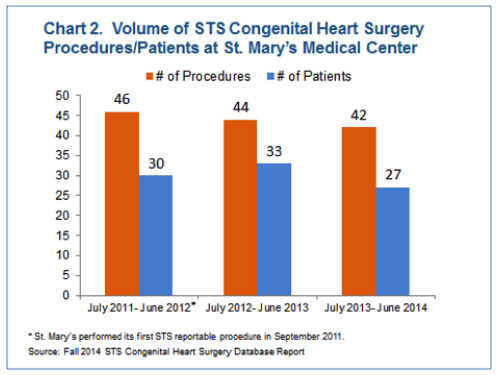 As a new program, we acknowledge that we are currently performing fewer than the recommended volume of 100 cases or more annually.  Our current and historical volumes are shown in Chart 2.  We are working to build our case volume, while also remaining committed to gradually increase the complexity of the procedures performed as our program matures, as was advised by external reviewers as part of the voluntary assessment we requested from the Florida Department of Health in early 2014.

St. Mary’s Medical Center and Dr. Black are committed to the ongoing improvement of our program, and to reinforcing the community’s confidence in both the program and the entire hospital.  We have launched a comprehensive review of the pediatric cardiac surgery program, which includes soliciting and utilizing external experts and bringing in other additional resources.  We currently have no elective pediatric congenital cardiac surgery cases scheduled, and we do not intend to schedule any until we have completed our review.  We carefully considered this decision, including the impact on our ability to get to the appropriate patient volume levels, and believe it is the right thing to do.

In addition to our internal review, we have been in contact with regulatory officials for the State of Florida and the U.S. Centers for Medicare and Medicaid Services to discuss the performance of our program.  We will fully cooperate with any review they believe necessary to ensure our program is in compliance with all applicable standards and providing consistently high-quality care to patients.

We deeply regret if any of our actions have caused concern within the community about our unwavering commitment to quality and safety.  This includes the one week delay in responding directly to CNN’s claims.  The delay was necessary to ensure the accuracy of all information provided in our response. We are committed to restoring trust by conducting our review and by openly and transparently operating our program for the local community.  We will not engage further with CNN, and will consider all options to ensure that the network, its reporters and editorial staff will be held accountable for the inaccurate, misleading and damaging claims.