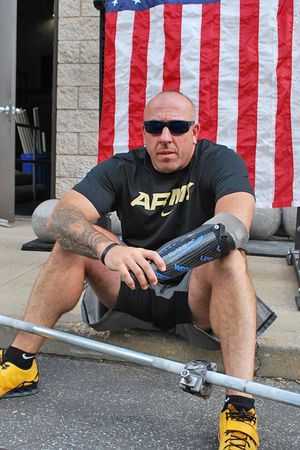 Sebastian “Sam” Cila may appear to be what most people would consider a perfect example of a healthy, fit adult. He’s completed various fitness competitions, works with collegiate and professional athletes throughout the country, and is also a retired U.S. Army Staff Sergeant.

It was during Sam’s time in the Army, while on a year-long tour in Iraq, that he faced one of his biggest challenges: the blast from an improvised explosive device that eventually cost him his left hand. Thanks to his fighting spirit, and the support of Anna, his wife of nearly 15 years, Sam didn’t let this experience defeat him. Yet after overcoming such a traumatic incident, no one could have guessed that Sam’s next major hurdle would be an internal attack.

“I was going through my normal workout one day when I felt a sharp sting in the back of my neck, almost like a bee sting,” he recalls. “I didn’t think it was anything major, so I continued with my routines. About a week later, I went to New Jersey for sparring practice with the New York Red Bulls.”

As part of this high-contact workout, Sam wore protective gear as the players took turns practicing kicks and punches on him. During the session, a cramping sensation formed in his right shin, making its way up his entire right side. Sam eventually couldn’t even hold the foam pad he’d been using to protect himself, but he assumed the pain was caused by dehydration or low blood sugar.

“After practice, I went outside thinking some fresh air would help, but it became apparent that something was seriously wrong,” he says. “My symptoms, coupled with the fact that I ended up walking right into a fence, made me realize that I needed to go to a hospital.”

About three hours after the initial onset of his symptoms, Sam collapsed in the lobby of the hotel where he was staying. The team at a local hospital told him that he’d suffered a stroke, caused by a frayed carotid artery. Sam was advised to relax for a few days and that the artery would simply heal on its own.

Two days later, back in Florida, his resilience was once again tested: the lack of adequate treatment in New Jersey led to a massive brain bleed and a second, more severe stroke. Anna noticed that her husband had suddenly become unresponsive as he lay on the couch, so she immediately called 911. This time, Sam was taken to the Comprehensive Stroke Center at St. Mary’s Medical Center, the highest state-designation for stroke treatment.

Dr. Ali Malek, medical director of the stroke center, and his team discovered that an arteriovenous malformation (AVM) had developed. He performed an embolectomy to repair the AVM, and placed a stent in Sam’s vein to allow regular blood flow. As one of the nurses said, it was miracle that Sam survived.

“One minute I’m adjusting the A/C in my house, the next minute I’m waking up with my wife and Dr. Malek telling me I’ve just gone through brain surgery,” he shares. “The first thing I did was feel for scars, but with the advanced technology available at St. Mary’s, he was able to access the AVM by going through a vein in my groin.”

Although he still had lingering weaknesses from his second stroke, Sam immediately noticed that the residual effects from his first stroke were now gone. After a few sessions with the rehabilitation specialists at St. Mary’s Medical Center, he took what he learned and continued his recovery process in true Sam fashion: building his way back to his normal intensity through Crossfit and modified exercises.

Three months later, thanks to his discipline and exhaustive efforts to regain his strength, Sam was back to performing at the same level he did before his strokes. Anna got her husband back, their sons Sam Jr. and Evan got their dad back, Sam got another chance at life, and his clients have even more reason to feel inspired by his limitless fortitude and the extraordinary circumstances he’s been able to overcome.

This testimonial reflects results achieved by this patient. Each case must be independently evaluated and managed.